While records about laminitis appear to date back as far as the third century BCE when Xenophon and Aristotle wrote of “barley surfeit,” there have been surprisingly few treatment methods for this condition. Some methods were extremely backwards and painful (bleeding or hoof resectioning), and others offered some degree of success but only if treated in time. Stopping acute laminitis from developing into chronic laminitis (and therefore becoming much more difficult to reverse) has always required quick treatment — usually within the first 48 hours — before it is too late.

Even though the disease is the second leading cause of death in the United States of America, with an average of 160,000+ horses euthanized annually, there have been only a few treatment options that have shown some degree of success in reversing the effects of laminitis. Many of these treatments are costly, time-consuming, or can be difficult to undertake without the guidance of a veterinarian. 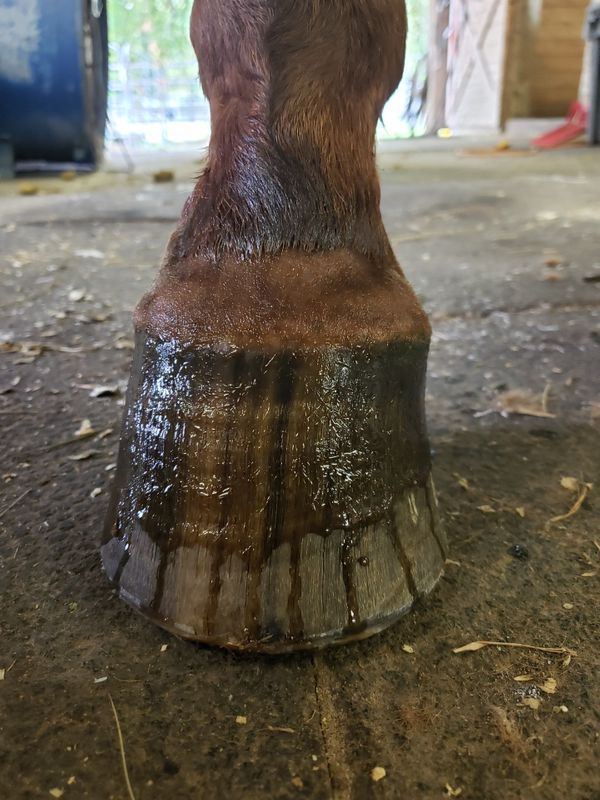 Laminitis is a condition in which the tissue that connects a horse’s hoof to the coffin bone becomes inflamed, weakened, and damaged. It usually begins to present as lameness (either pronounced or slight), a rising hoof temperature, elevated digital pulse, difficulty standing, and an unwillingness to walk. This stage of the condition is called acute laminitis.

If untreated, acute laminitis becomes chronic as the coffin bone is displaced. Lameness can begin or grow worse, a horse may lose weight, and they may have increased digital pulses. Over time, other developments, including abscesses, as well as the coffin bone penetrating the sole of the hoof, can occur.

Recent research has shown that several matrix metalloproteinases (MMP) exist during the acute phase of laminitis. These enzymes digest the collagens that bind epidermal and dermal lamina together. They also break down the extracellular matrix.

When functioning properly, the extracellular matrix stops the immune system from dealing with inflammation while allowing the cells surrounding an injury to repair tissue rather than scarring. When oxidative stress is found along with inflammation, it can have devastating effects on the lamina of the horse’s hoof.

How is Laminitis Treated?

Generally, most cases of laminitis are treated in a number of ways, including putting the affected hooves in slings, rest, pain management, diet management, cold therapy, and regular care from a farrier. While these treatments can provide relief and slow laminitis from growing worse, they don’t treat the cause of the condition.

The main protein found within the extracellular matrix. Collagen is one of the core components that is damaged when a horse develops laminitis.

Type IV collagen is a basement membrane collagen that binds the dermal and epidermal lamina. There are four types of Fibrillar collagen (type I, II, III,V) found in the extracellular matrix that are required to support and organize the cells of the lamina. Each of which can be damaged by various metalloproteinases.

A desmosome is a cell structure that aids in cell-to-cell adhesion.